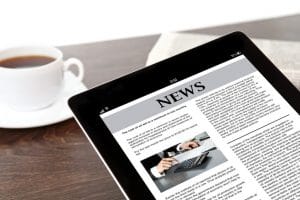 With the arrival of the Internet, followed by the first informative websites and the later emergence of the blogosphere and the social media, the news landscape has radically changed around the turn of the 21st century. Since then, communication no longer goes only through the printed press and the traditional broadcast media, whereas the quantity and speed with which digital contents is disseminated have seen an unprecedented and explosive growth.

However, the effects of this digital revolution and of the crisis that subsequently erupted in 2008 did not stop there. The attractiveness of the screen and the information available free of charge on the Internet brought the print media into an uncomfortable area. Most titles, whose sales had fallen, responded by investing in informative content offered online while betting on advertising revenue from the Web, without success. Then, here and there, Web and paper editorial teams merged to rationalize costs, in particular. And since 2010, daily newspapers have redesigned their business model by introducing restrictions on access to non-paid viewing of their online contents.

That said, things are still moving. For example, in recent years, promising trends took root in some countries, such as data journalism, visual journalism, virtual reality-augmented journalism and crowdfunding journalism.

This brief summary of events attests to the degree of attention we bring to the media arena. And we are all the more attentive to it since it is up to us to provide journalists, bloggers, and influencers with valuable information as effectively as possible to achieve the best earned media coverage for our customers.

Range of services offered by Eurolife